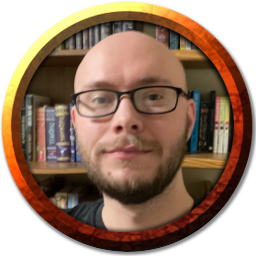 You walk into the wolves' den tavern and see a man behind the bar. his beard and bald head are eye catching but what really stands out is the group of six people clustered around him rolling dice. they laugh as he slips in and out of character so seamlessly it's as if the NPCs were really there. I'm the founder and head GM of a collaborative group of awesome creators called the wolves den tavern! and I'm here to take you away to somewhere fantastical! Sit down! have a drink and check out my campaigns!

I am a very by the book dm in terms of rules. I tend to stick to in print source material and don't allow unearthed arcana. I also love voices for role playing, and combat scenarios with more than just a giant slugfest taking place. I want my players to think and feel the way their characters do.