Rifts is a post apocalyptic science fiction/fantasy setting which allows for any kind of character imaginable. Rifts is famous for its detailed setting and infamous for its complex ruleset. Rifts features Bots, Borgs, Cyber-Knights, Dragon Hatchlings, Mind Melters, Robot Pilots and Techno-Wizards as sample character classes, not to mention hundreds of others. Alternate Rifts refers to my edited ruleset, streamlined for a fast paced and cinematic gaming experience. Many details are optional and game balance is monitored to create a game which is fun and challenging for first timers as well as long time fans of Rifts.

Webcams/Microphones may be used in lieu of a Smartphone. Character concept should be conceived in advance. Statistics may be generated or left undefined. Once defined, they should be easily accessible. A set of RPG dice is recommended. Besides the conference app, no other software should be necessary.

I have a campaign database consisting of over a hundred fully generated combatants, atmospheric sights and sounds, various maps, an overactive imagination and the highest standards of role playing excellence

Alternate Rifts is a game of intuitive choice. Choose advantages and disadvantaged for your character. On your turn, choose how many actions to spend on attack and how many to hold for defense. More advanced options will be presented as the player describes what the character is thinking and doing.

In order to play, a character must have a concept including appearance and attitude. A greeting or catch phrase will establish the character further. The most important statistics for combat are Initiative Bonus #of Actions Aim bonus at range Kill bonus in Hand to Hand Dodge bonus to avoid any attack Parry bonus to avoid Hand to hand attacks Roll with Impact bonus for reducing damage Save Vs Magic and physical effects Save Vs Psionics and mental effects MDC or mega-damage capacity of armor or hide Damage output of weapons or attacks All of these may be assigned quickly. Other details may be undefined at the start of play. 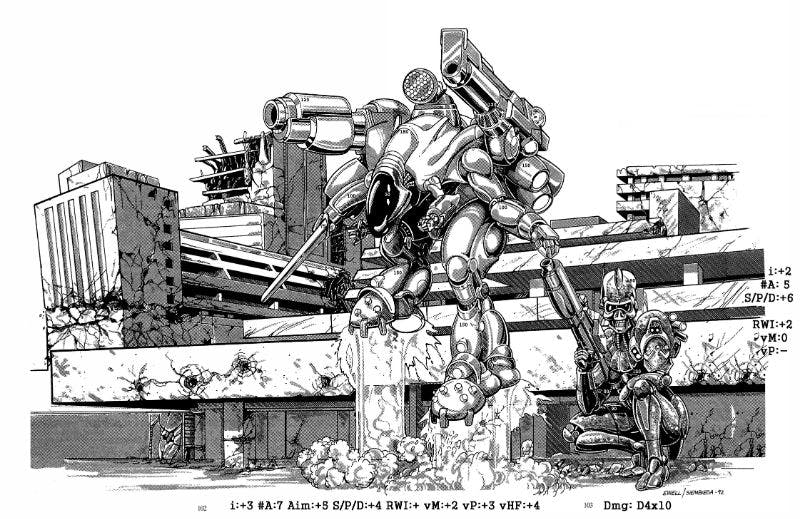