It is the sixth age. Humanity has entered into a time where magic exists once again. Corporations rule the earth and even though governments still exist, they are mostly pawns to the big players. Power struggles happen between the giant corporations and that is where you come in, a shadowrunner. Corporations don't want to get their hands dirty, that's why they hire you. Perhaps you're a decker, hacking into security systems in the Matrix lightning fast moving at the speed of thought. Or perhaps you're a street samurai who has given up their body into cybernetics to become a fighting machine. Maybe you are attuned to the astral world as a magician who is able to conjure up spirits and cast spells. Don't get caught, be careful when you meet your employer (named "Mr. Johnson"), aim low and conserve ammo, and never deal with a dragon. Currently, the campaign is doing a "race" around the world sponsored by higher powers (corporations, a few governments) to find the elite shadowrunners in the world. Basically, the "race" is an excuse to explore locations in the Shadowrun universe. Currently, the group is headed towards Hawaii. After that, Asia will get explored. The group enjoys roleplaying opportunities as well as combat. If you want an idea of how a game looks like, check out my YouTube channel! Shadowrun takes place in a near future dystopian setting. The best way to describe the game is a cross between "Bladerunner" and "Lord of the Rings". Magic has returned as well as mythical creatures. You can play a human, dwarf, elf, orc, or troll. Using either cybernetics or magic, you become a very desirable force as a "Shadowrunner". The characters main job is survival as they are hired by powerful forces wanting to acquire information or other goods. This game is played twice a month, first and third Thursdays of every month. With months that have five Thursdays in them, we will sometimes play on the 5th Thursday.

38 years as a TTRPG player

31 years as a Game Master

Brings I'm currently doing online games only, so everything is set up on the platform that we use. to the table 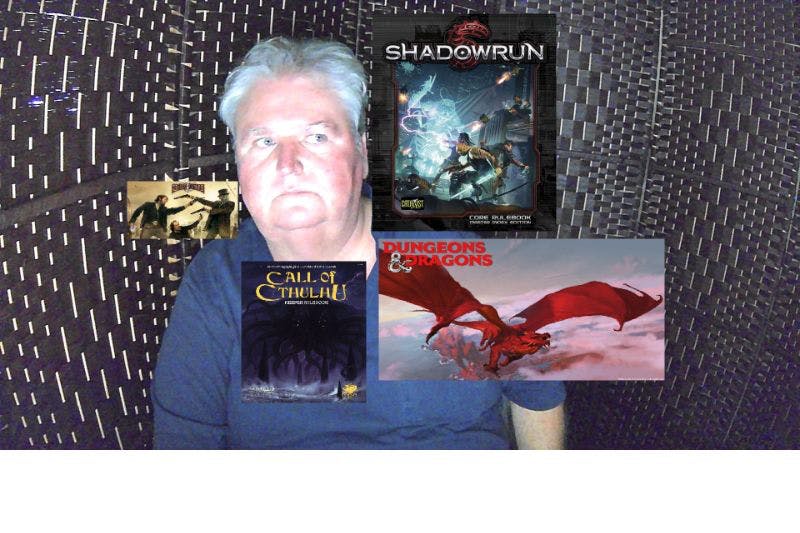 Have a Roll20 account ready. I'll supply characters. If you have your own 3rd edition characters, contact me prior to the game. If you know what type of character you want, let me know in advance. Options may include: Street Samurai, Mercenary, Decker (computer hacker), Face (the negotiator with tons of contacts), Hermetic Magician, Shaman, Gang Member, Rigger (interfaces with drones and vehicles), and Physical Adept (magical person with physical powers). If you have a character concept that you think would work, contact me.

Dice are online, rulebooks and sourcebooks are also online and easily accessible, characters can also get supplied.

I love the 2050 through 2062 timeline, so 3rd edition is my favorite. I'm also familiar with later editions. A typical Shadowrun game is tons of investigation and planning in the beginning. The ultimate goal is to get into a place and out without combat. It never happens that way, but one can always try. Most of the game is planning for the run itself, getting in touch with contacts, setting up how you're getting into a location, etc. The last moments of the game is dealing with whatever has happened at that location and fighting your way out. That is why the combat level is rated low but puzzles high. For a quick rating, I tend to run at a PG-13 rating. If younger children join up, I will modify to where parents are comfortable. For horror based adventures, players are encouraged to use traffic light signals when it comes to comfortable/uncomfortable situations. Green is fine, yellow is proceed with caution, and red is a stop. You can either type this in the VTT I'm using or say it out loud in the Discord chat. The last thing I want is players to feel uncomfortable. I want to create a game experience that everybody enjoys.

I can come up with a character for you or you can do one yourself. Let me know what you prefer!