Shadowrun 5E for people familiar with the system, but might be newer players. I set it in the Dallas-Fort Worth Greater Metroplex Region. This is the monthly "first game is free" session. This is where you get your feet wet, find out if you like the style and group, and whether this is your flavor of soykaf. I bring pre-generated characters for you, or you make your standard character as per the core rule book priority system. It's 2070, and it's just tough being alive. The Atzlatans down South want us all dead, The Confederate American States are on-again off-again friends, the AmerInd tribes refuse to bury the tomahawks , and now there's rumors of one of the Dragons trying to make DFW like Denver. That's what the local news trids say, at least. You just moved here because it's the best place to lie low for a while as no one wants to follow you here. I plan on running this as a living region style of game, where players can join in for a job per session and things will happen in the overall narrative directly sculpted by the players' actions. But at first, they got to get their feet wet in one of the two Trinity's tributaries. And the water's a lot deeper than it looks.

Brings Maps, miniatures, initiative trackers, whiteboards, secret messaging, a flair for the dramatic. to the table

Please make an account on Astral Tabletop, which I will be using in the future for sessions. Discord is required for audio only. Zoom could be used for audio AND video depending on what the session preferences are. https://www.astraltabletop.com/ I recommend reading as much of the material that the player wishes on https://www.shadowruntabletop.com/game-resources/ to familiarize themselves with the setting. Quickstart rules are available there to download for free, as well as several documents that dive into the lore and timelines that led to the futuristic, fantastical dystopia of Dallas in 2070.

I will be providing the maps needed, if any, for the session. I will be creating the NPCs, the scenarios, the world data, and more from the repertoire of past games set in Dallas of 2070. If you bring a willingness to learn and a tiny ounce of patience, I'll bring enough of a dramatic flair to make it interesting, a cheer for a clutch dice roll, and hopefully, plenty of laughs.

Most shadowruns have a pattern. Remember, you're already a professional by the time your character is playing, so you'd know all this too. There's a meetup with the Johnson or patron paying for the job. They need paydata, a person, a thing, something to happen or not happen, or occasionally taking someone out of the picture. You negotiate terms and prices. Don't be too nosy, but don't go in blind. Second, there's legwork and investigations done to try and plan out how to complete the job. Maybe you have 24 hours or two weeks, but either way, knowledge is power. Maybe you have to scrounge materials or equipment, or call in some favors. Perhaps someone else you know, one of your contacts, can help? Then there's the execution. They heist, the job, the work. Depending on your planning and legwork, it might be a smash and grab that barely succeeds and shows up on the nightly news (not a good thing!), or a finely tuned stealth job where they're not even sure how or who did it. Lastly, there's the drop. You either get paid or you're paying someone to hide you and lay low for a while until the heat blows over. The people you did the job against usually aren't mad at you because you weren't the one paying. But there's one thing you got to remember - there's always a twist. Maybe the intel is bad. Maybe the person you're meeting doesn't know they're meeting you and definitely don't know you're "strategically relocating" them to work for another company. Or it's not the urban jungle, but actual Amzonian jungle. Or the security is on high alert from the previous team that got sent in and lost... But they don't pay you because it's easy. With the right amount of teamwork, and living on the Edge (luck attribute) maybe you pay rent this month.

Pre-generated characters are available to use for a session. As long as character sheets are sent a day in advance, players can make their own character using the Priority or Life Modules system found in the 5th Edition and Run Faster books. 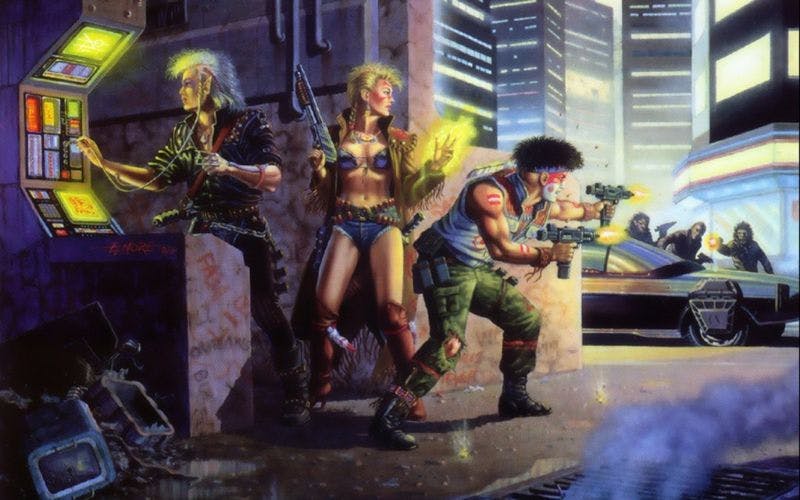