Blades in the Dark on Roll20

Blades in the Dark follows a crew of scoundrels earning their place in a city full of thieves and ne’er do wells, some of them wearing the veneer of government, nobility, and legitimacy. You’ll take on jobs suited to your skills, sometimes taking on as much or more than you can handle. Take it you must though, because Doskvol does not give out charity. There is a dark gothic steampunk aesthetic to this fantasy setting where the sun doesn’t shine and the stars are in the depths of the sea instead of in the cloudy black sky. Ghosts, monsters, and worse haunt the deadlands outside the enclaves humanity has carved out, and the blood of magical leviathans power the lightning barriers that keep them away from the city walls. Spirit Wardens keep the ghosts under control, unless =you= have use for one; then you’d best catch it first--and the Wardens don’t share their tools. There is an aristocracy in Doskvol, loyal by degrees to an immortal emperor, but the empire is far away, and power in the city is close to hand. Some play the long game—easy for vampires—and some are powerful crime lords in their spare time. Such is the labyrinth your crew of scoundrels gets to navigate. This is a fiction-forward game related to the Powered by the Apocalypse system, where what you describe in the fiction will trigger mechanics and consequences, which then influences the fiction, which triggers mechanics and so on. There is a well-defined cycle of play based around the idea of doing jobs, for which you are rewarded with influence and money. Then during downtime you prepare for the next job (using hard-earned influence and currency), recover, and gather information. The cycle repeats, and you hope each time you end up a little farther ahead than where you started.

41 years as a TTRPG player

41 years as a Game Master

Brings An extensive library of games, featuring Fate, Powered by the Apocalypse, Forged in the Dark, GUMSHOE, Pathfinder & D&D 5e, indie spotlights, and games that are still in Kickstarter production or playtesting. I also bring VTT assets, and stream production tools even to private games. to the table 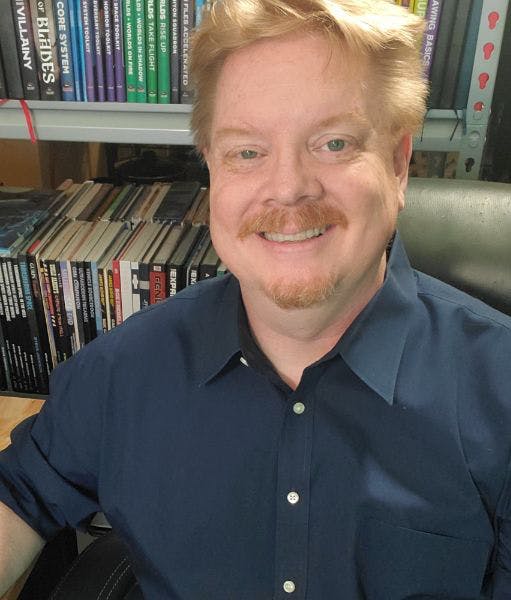 Players should have a microphone and webcam, and accounts on Roll20 and Discord. They should come to the table with an air of cooperation and excitement to tell a fun story together. Familiarity with the rules is optional, they’re available from Evil Hat online or in physical form at most game stores, even Amazon. Again, though, buying the rules is not required at all. If you want to do something to prepare, watch episodes of Leverage, or have a heist movie night for the Ocean’s series, The Thomas Crown Affair, or The Italian Job (either version). Play some Dishonored or Assassin’s Creed. There are also many streams of Blades in the Dark on Youtube and Twitch. John Harper is the designer, and there are episodes of him playing the game on Youtube that are well worth watching.

My goal is to make the VTT environment fun and immersive. Maps, handouts, music and art.

Blades has roots in Powered by the Apocalypse systems, but is different enough to be considered it’s own thing. When you roll you’ll either succeed, succeed at a cost, or fail. Blades allows you to roll more dice, looking for that success, by accepting help from a friend or accepting a Devil’s Bargain: big rewards require big risks. There is an innovative system for determining how effective you’ll be at what you’re trying to do, all following from the fiction and how you describe your actions. A session generally consists of gathering information about a job, doing the job—the action (combat if things go poorly)— and down time afterward where you and your crew can recover, improve your position a little, and start to plan the next job. Blades jumps right into the action, using flashbacks to save valuable table time and allowing complex plans to be formulated in the moment. Think of the flashbacks in the show Leverage or the movie Ocean’s Eleven. The heist movie vibe is very strong. There isn’t really a wrong way to go about climbing the criminal ladder in Doskvol. Combat can be lethal, but it’s also possible to put together a character and crew that is very dangerous in combat as well—if you want to make that a focus it is possible to cut a very red swath through the darkness of the city. The setting and system does lean toward a heist movie mentality, and using stealth, the social skills of deception and persuasion and perhaps a touch of mad science and magic are common paths to success. This is a game that’s going to appeal to anyone who has played Dishonored or Assassin’s Creed, or watched a heist movie. The system is simple to pick up, but has subtlety and complexity as players grasp the nuances. I will be teaching as we play, and by the end we’ll all be experts.

Character creation is quick and easy enough that pre-generated characters won’t be necessary. As in Powered by the Apocalypse games players will choose playbooks, which operate much like classes in D&D providing special abilities. As a group players will also choose a type of Crew, from Assassins to Smugglers, which helps color both their abilities as a team and the types of jobs they commonly do. Bravos—thugs—might have jobs extorting corrupt merchants, while thieves break into mansions to steal haunted jewels. Abilities for player and crew are chosen from the appropriate playbook, the player only need to add color and breathe life into the stats; a matter of minutes. Like many Powered by the Apocalypse style games there isn’t much preparation you can do before the game starts. Too much relies on coordinating and cooperating with the rest of your crew. Look over the crew playbooks and decide on a few you’d be happy to be in, or would definitely want no part of—it’s all right to say you don’t want to be an assassin or in a weird cult. Look over playbooks and see if any strike your fancy. Any playbook can work on any crew, so find a couple you like. We’ll have a Session Zero to create characters and crew and get to know one another and talk about safety topics. Blades can be very mature, so we’ll hammer out what we do and don’t want to see in a game, what can happen off-screen, etc. I want everyone to be comfortable at the table together.